This blog needs to start with a description of our most up and down travel day we’ve had yet.

Tears shed in the emotional farewell with our cousins in Zeist were blasted away by the ice cold wind of a pre-dawn skelter, dragging our four bags (and five day packs) across the largest car park in central Holland to the international bus stop in Utrecht. In a Hollywood-esque scene, Squirt took a tumble in the dark but (cue dramatic music) we hauled her up without barely breaking stride and determinedly ran onward shouting encouraging words over our shoulders hoping the wind would carry our sincere concern to her ears as she tearfully limped on.

After some further panic in the expanse of a darkened bus station, we found the Flixbus stop and from there the trip to Lille was comfortable and straightforward (and much better value for money than the train). 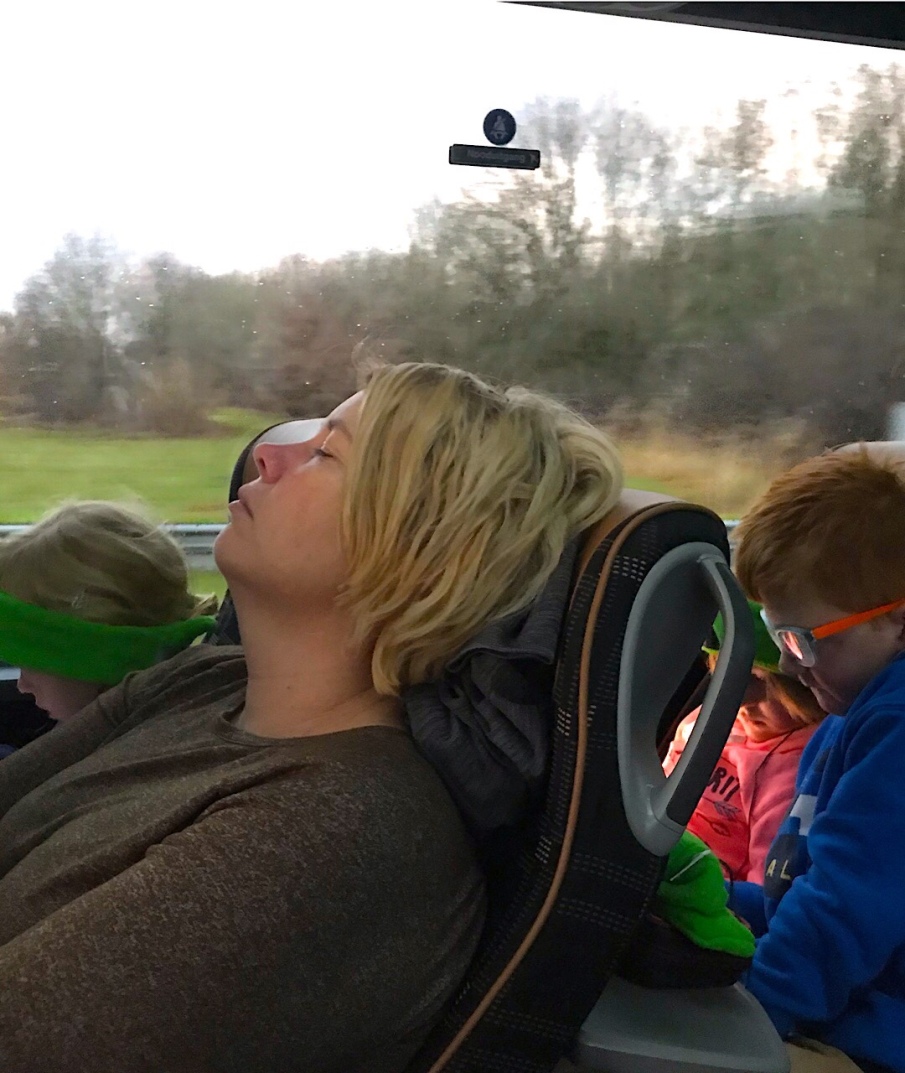 Good times ended right there. We got off the bus at Lille Gare Europe (train station) and started walking confidently across a large square towards the shopping centre opposite and the red dot on Google maps marking the location of our rental car outlet. Well, Google Maps lied and that red dot taunted us through the shops, around the shops and back and forth across that square – with kids and bags – a total of four times. Not one person in Lille, including four police officers, two security guards and one helpful German tourist, had heard of Budget. Yet again, we cursed our decision to restrict ourselves to wifi. We cursed the size of our bags. We cursed our lack of French. We cursed others’ lack of English.  We were irrational, sore and hungry. Just as we found the Budget office in Lille Gare Europe (where we began an hour earlier and a fair hoof from that bloody red dot) they told us they have another desk in the OTHER railway station down the road, Lille Gare Flandres (which we’d already been to and been told by a security guard there were no rental car offices). Shit. For the fourth and final time, CCTV cameras filmed us clattering our way across the square, around the shopping centre and deep into the bowels of the train station, to find Budget in the furthest, darkest corner. The guy behind the desk was helpful and polite, despite facing yours truly with the look and demeanour (and probably smell) of someone who’d been raised alone in the forest by a pack of wolves.

In a strange moment of positive karma, we were allocated a larger car than we’d booked and it had built-in satnav.  Hallelujah.  Well, satnav in French but hey what a great way to learn a few more words!  Not 30 minutes later and we had found our gite (rental home); a magnificent farmhouse in amongst the patchwork of trees and fields near the Belgium border.  It was by now two hours later than we’d expected to arrive and dark.  We reluctantly piled back in the car and used a combo of Google Maps on our phone (in an untrusting, passive aggressive kind of way) and French satnav to find the nearest supermarket, scooped half a trolleys worth of groceries on the run and headed back exhausted for a dinner consisting of the contents of a giant tin of cassoulet (beans and sausages). We hugged our kids and thanked them for being such troopers on a day that nearly sent us mums bonkers.

Now, let’s get on with our blog.

We spent eleven days in Flanders, split between two rural gites – the first outside Steenwercke and the latter on the edge of Looberghe – two northern French villages with Flemish names.  Between them we stayed a few days in Disneyland and Paris. 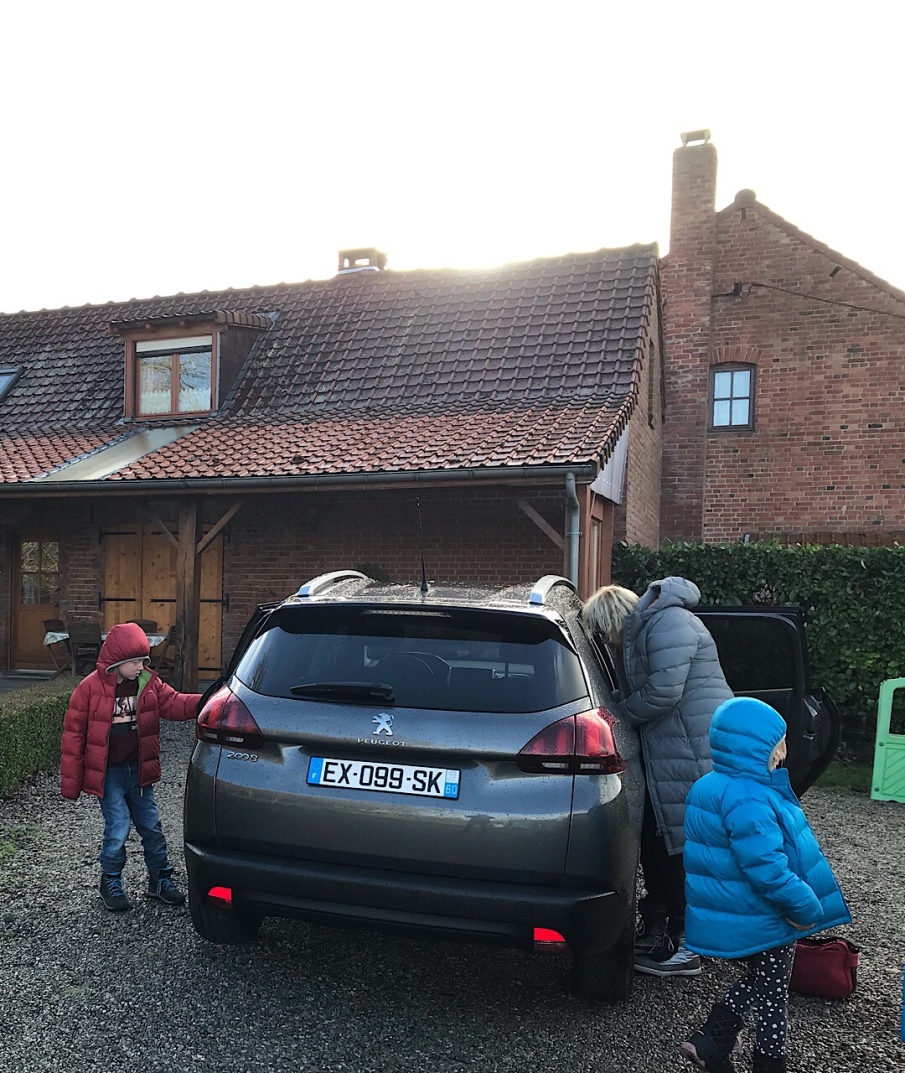 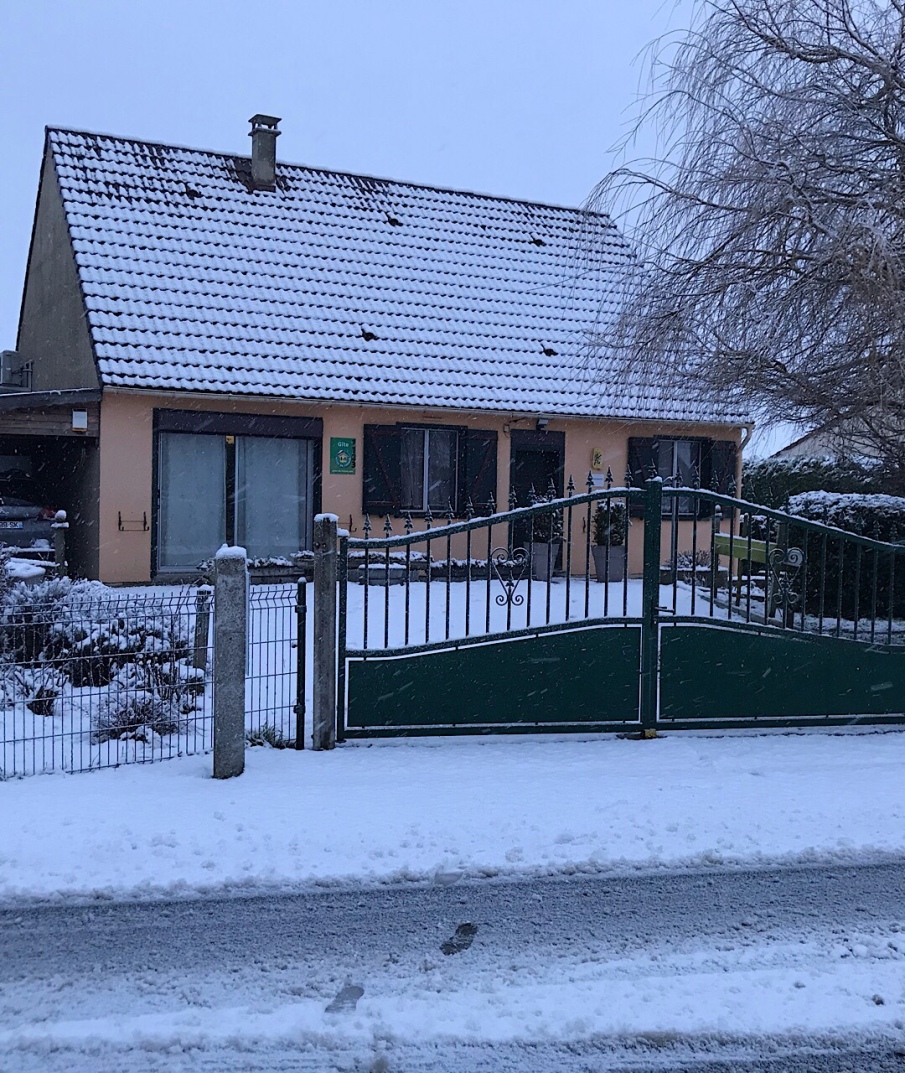 We speak French badly, or to put it more accurately, we speak about eight words really well which gives the illusion of proficiency and leads the people we meet down the proverbial garden path (like the gite owners), prompting them to say excitedly “Oh, parlez vous Francais?” at which point we say “Non Madame/Monsieur” (again, really well) and then look either daft at having sold them a dummy and then confused while we strain to understand whatever is said next. We wonder sometimes if it’s better to not utter a word of French until a time our foreign languages PhD is in the bag.  Thank goodness we could glide across to Belgium for lunch and have a modest exchange with someone in Dutch. 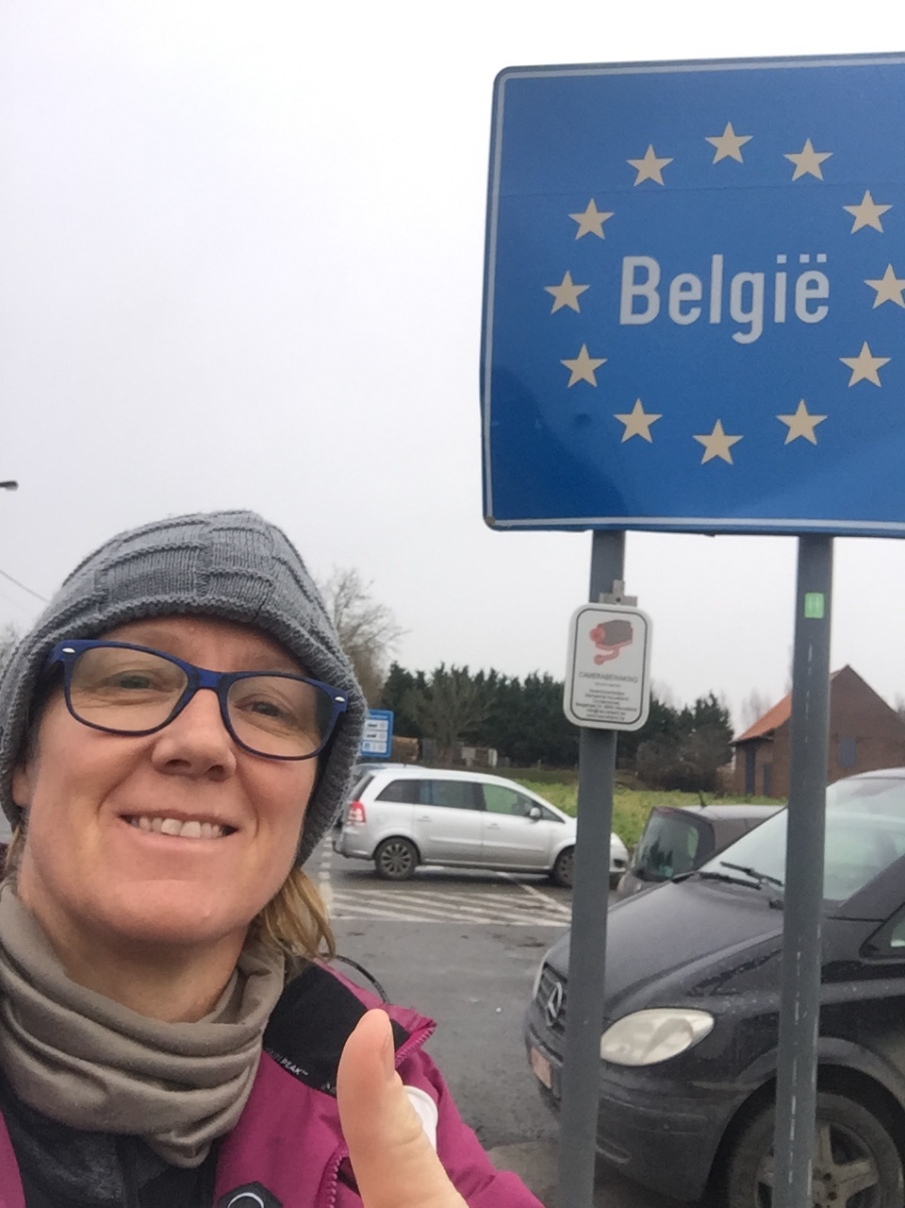 French workers take breaks. And good on them. As someone who has spent years scoffing her lunch at her desk while typing a few emails and then banging cheese and breadcrumbs out of the keyboard every few weeks I think they’re onto something. As a tourist, this culture of break-taking is a little less convenient. Tourist offices take a lunch break so that tourists can be politely ushered out into the cold to wander aimlessly through the town like a flock of lost sheep, because why would they want to stay and get useful information on what is worth seeing and actually open.

January is also ‘break month’. It seemed like every tourist destination, but Paris and Disneyland, were closed for January. We had intended to slow down a bit, visit patisseries, eat cheese, drink wine, and play games in front of the open fire in our gite … so this fact didn’t concern us too much. 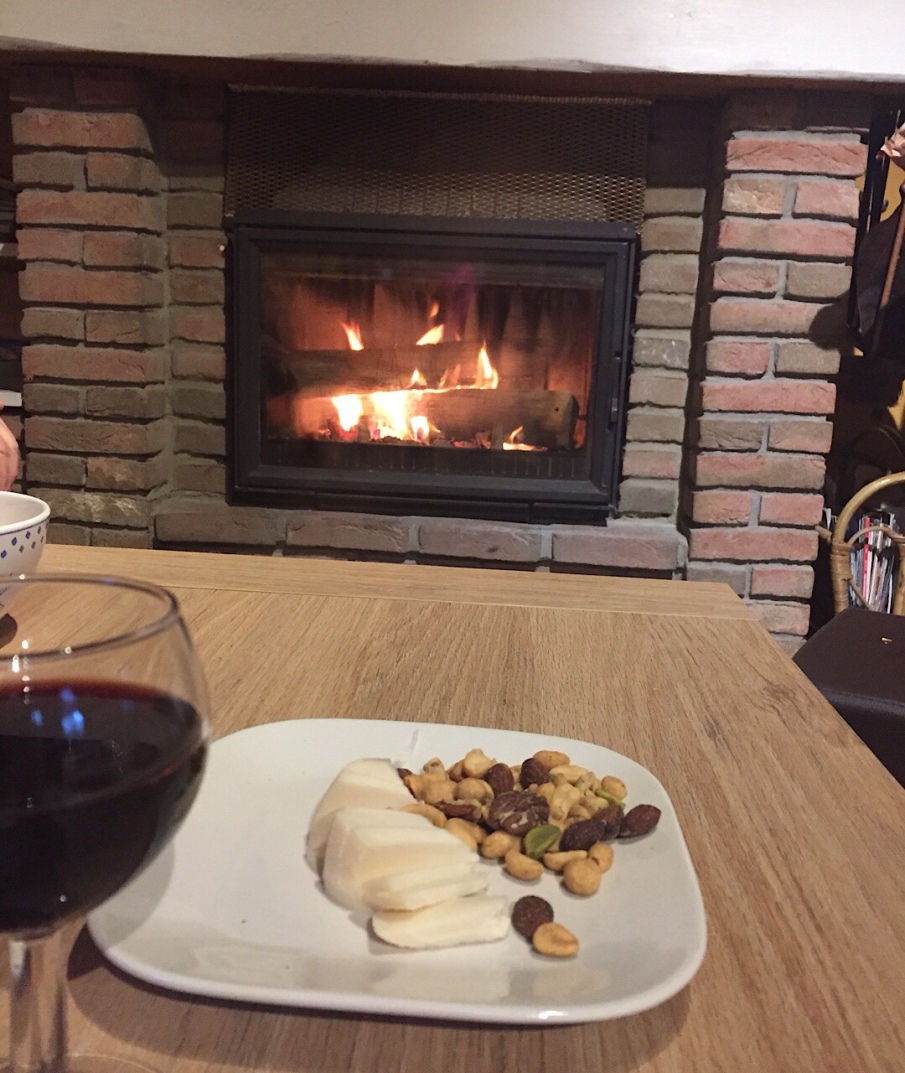 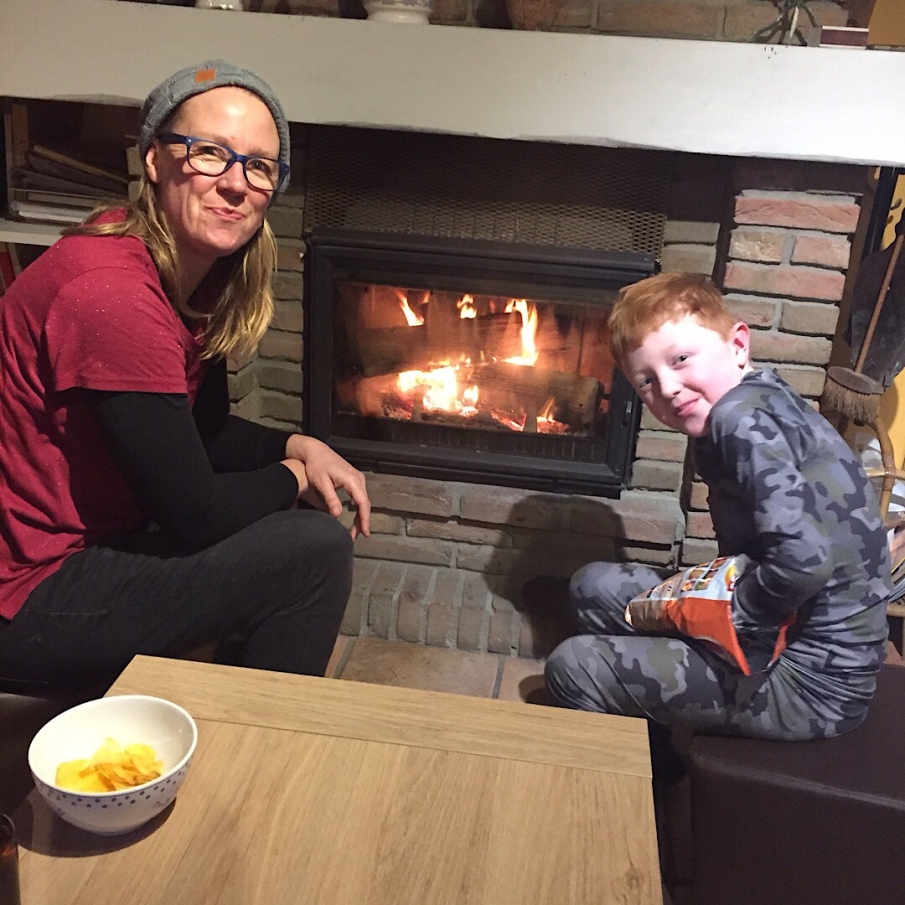 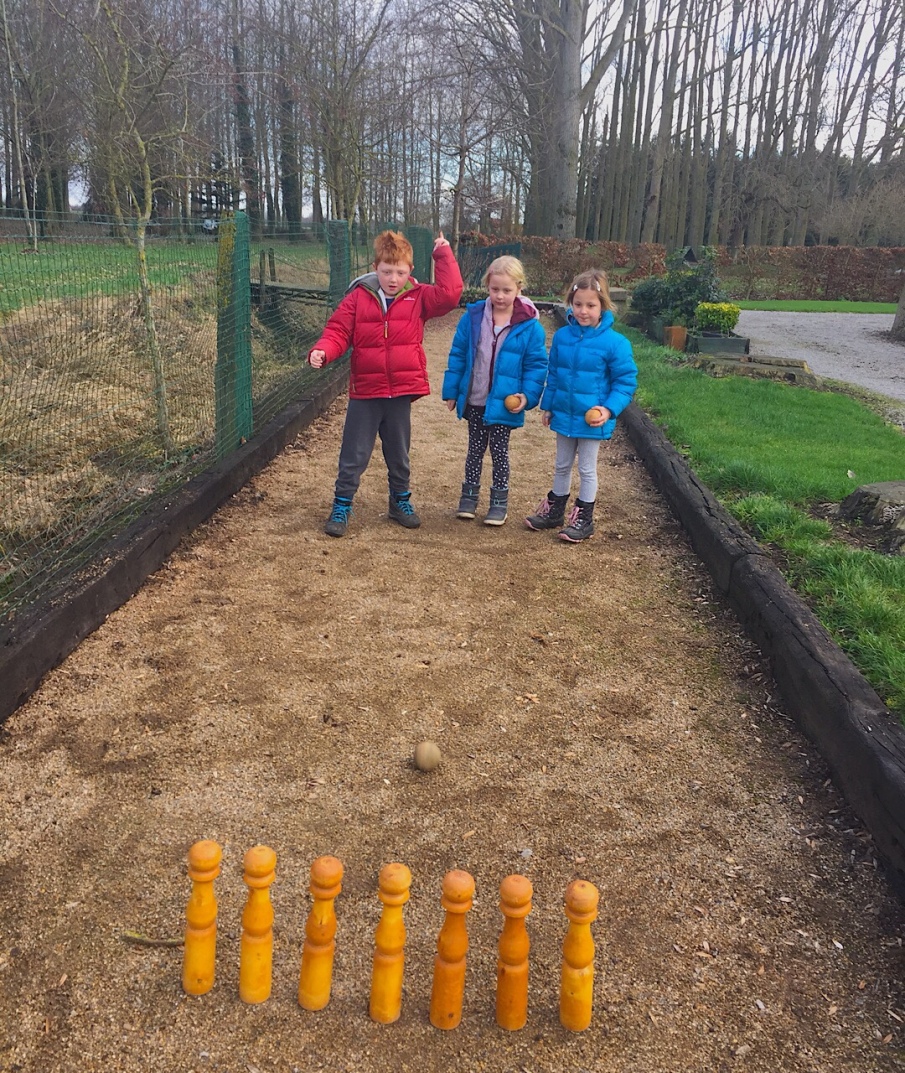 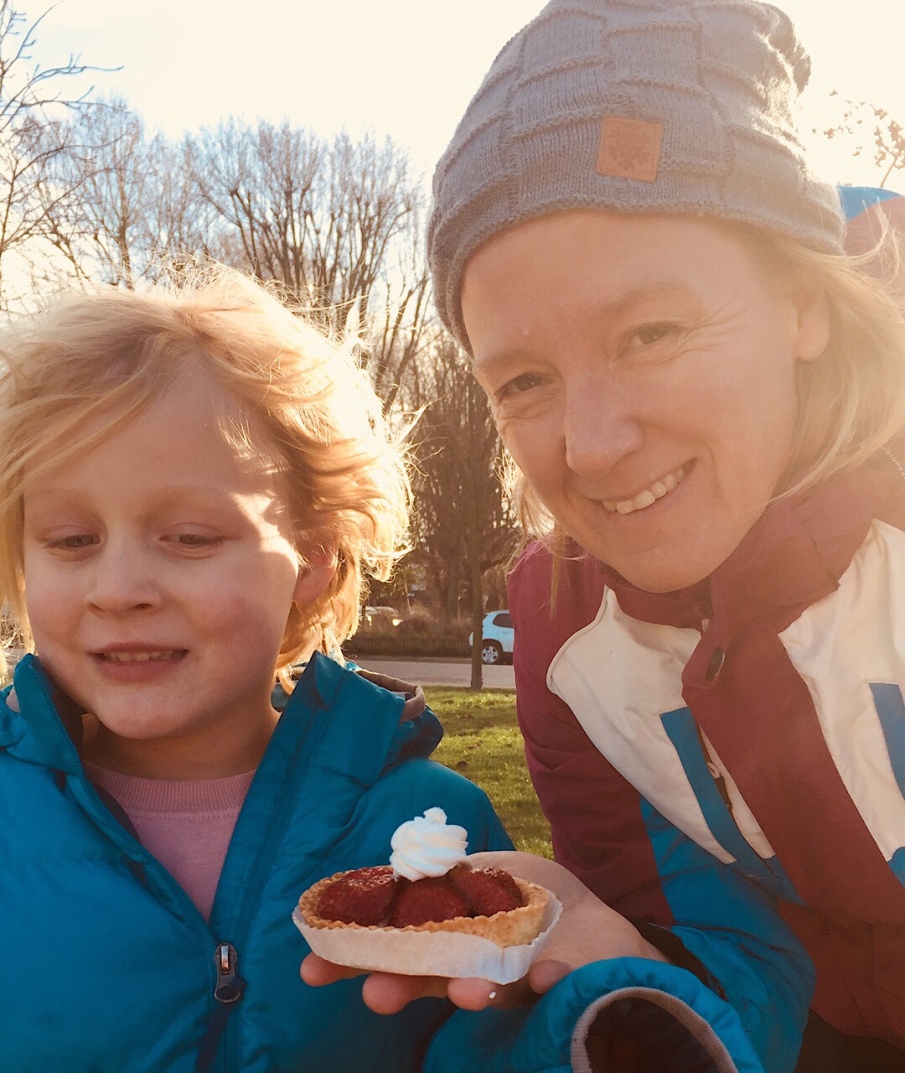 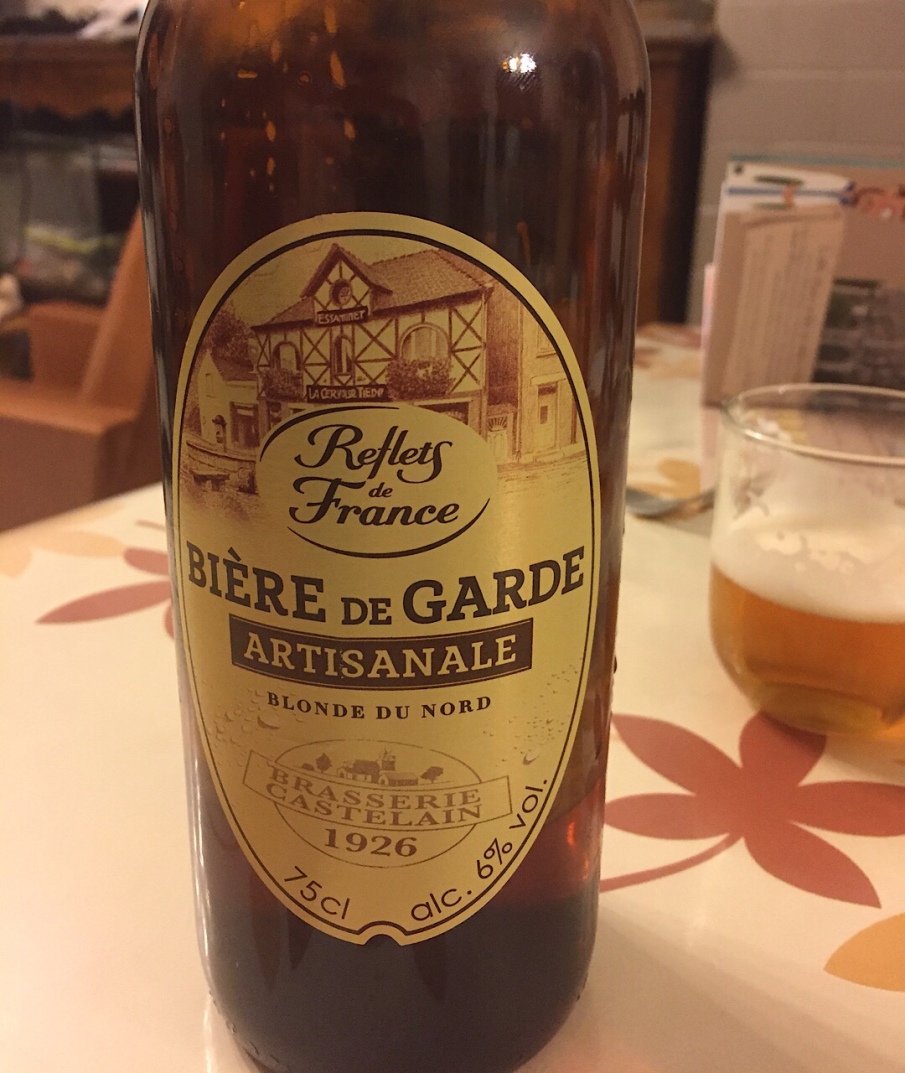 What we did thankfully see was central to why we were in Flanders at all, and that was to learn more of WW1 and WW2 history and particularly the terrible trench warfare that had once surrounded us. We saw the Battle of Fromelles Museum (built after the remains of Australian soldiers were exhumed from mass graves near the battle site), French Resistance Museum, Bayernwald trenches (recreating the German front line), Pond of Peace (British mega-bomb site), Lettenberg bunkers (site of Allied headquarters), La Coupole Museum (WW2 German rocket launch facility) and numerous war cemeteries. We gained the briefest glimpse into the bitter cold and unforgiving mud. In all, the experience was in equal parts a fascinating, educative, reflective, humbling and sobering time. 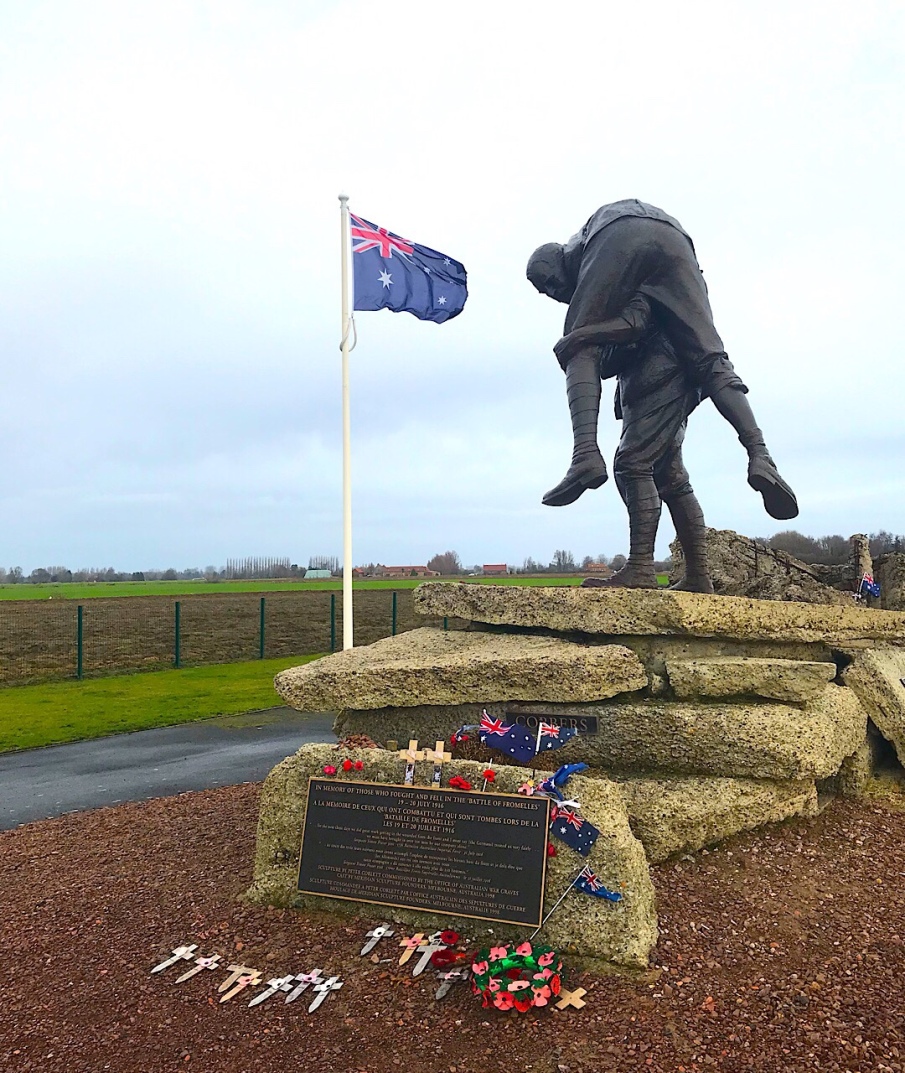 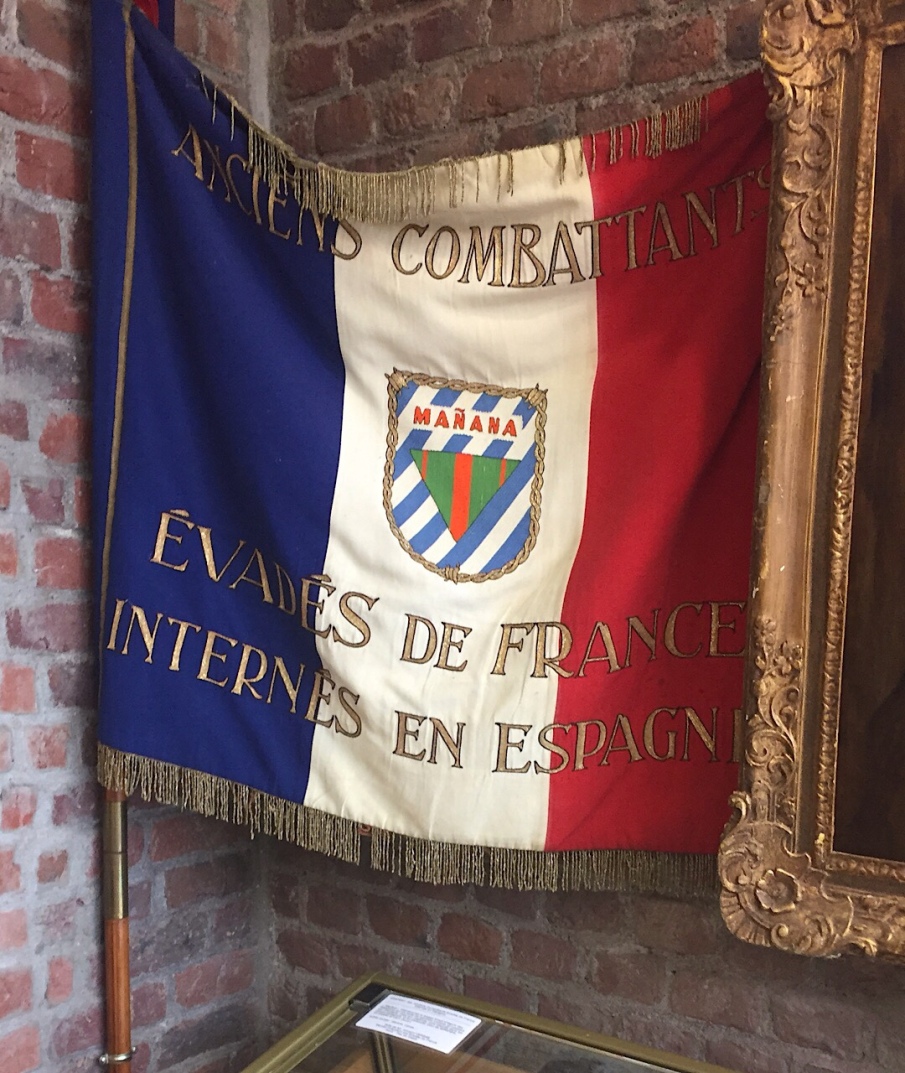 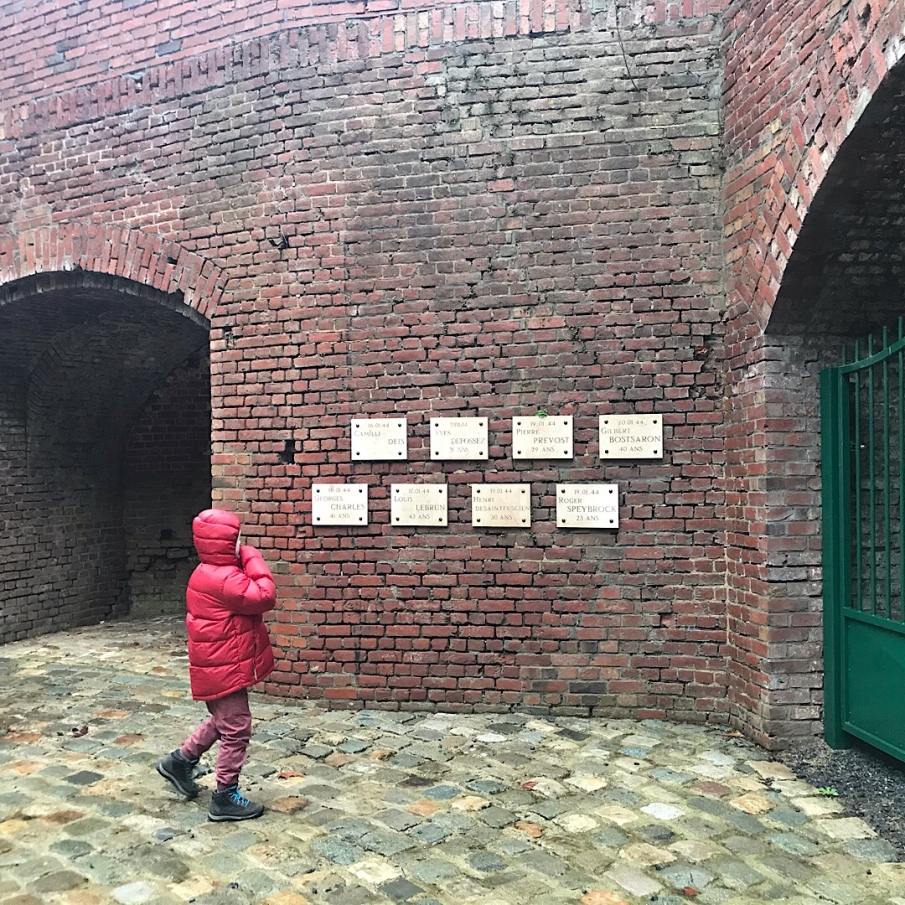 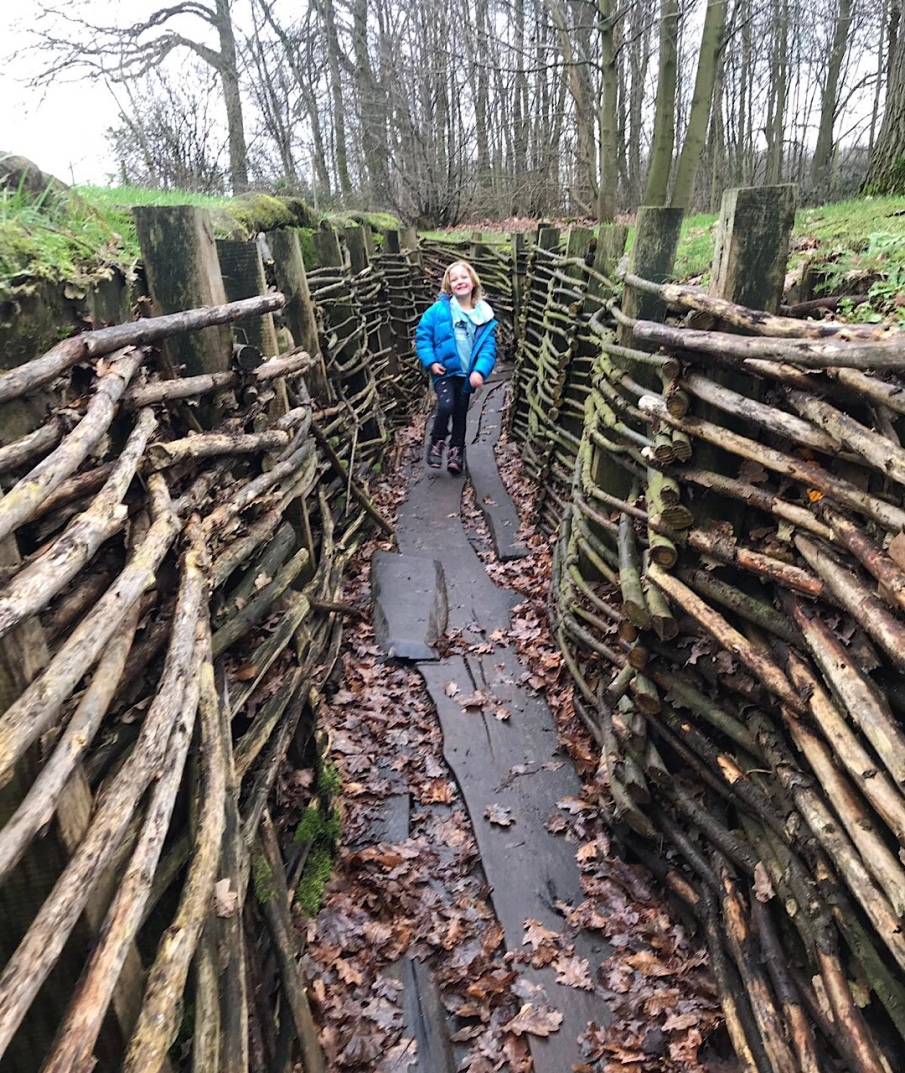 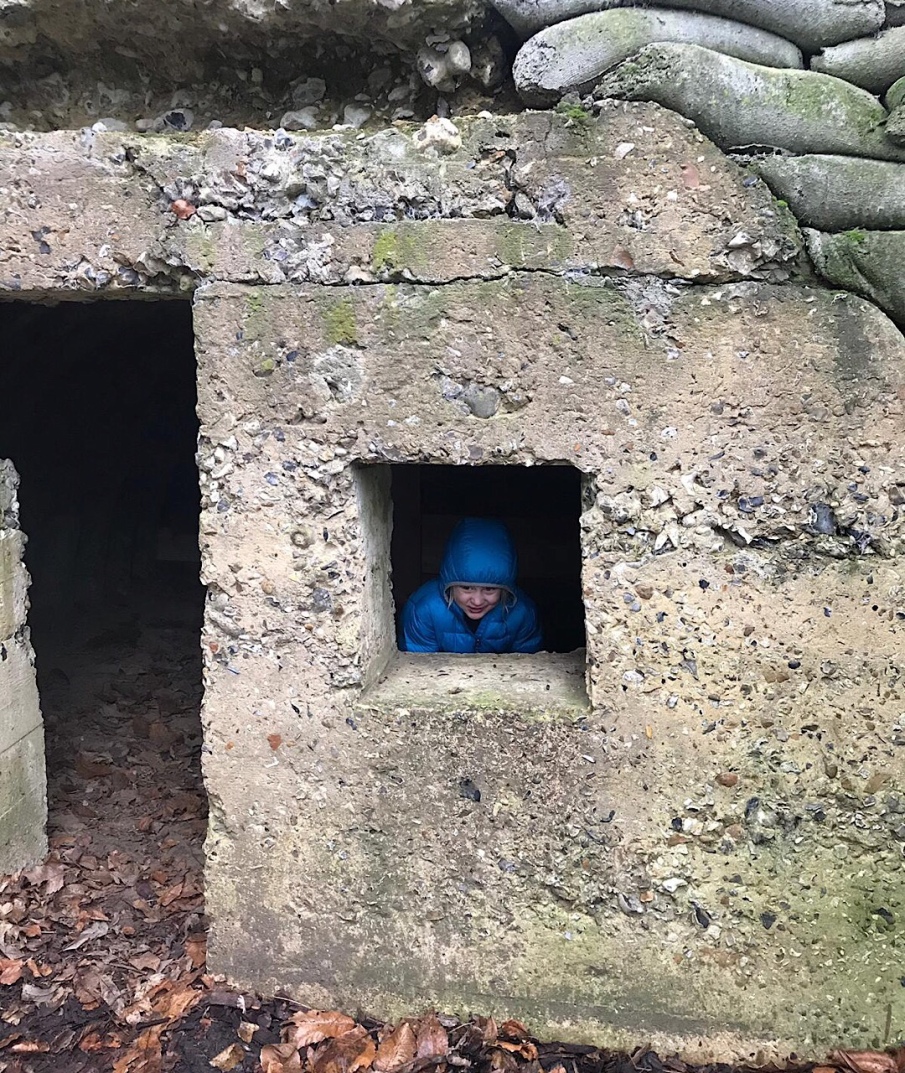 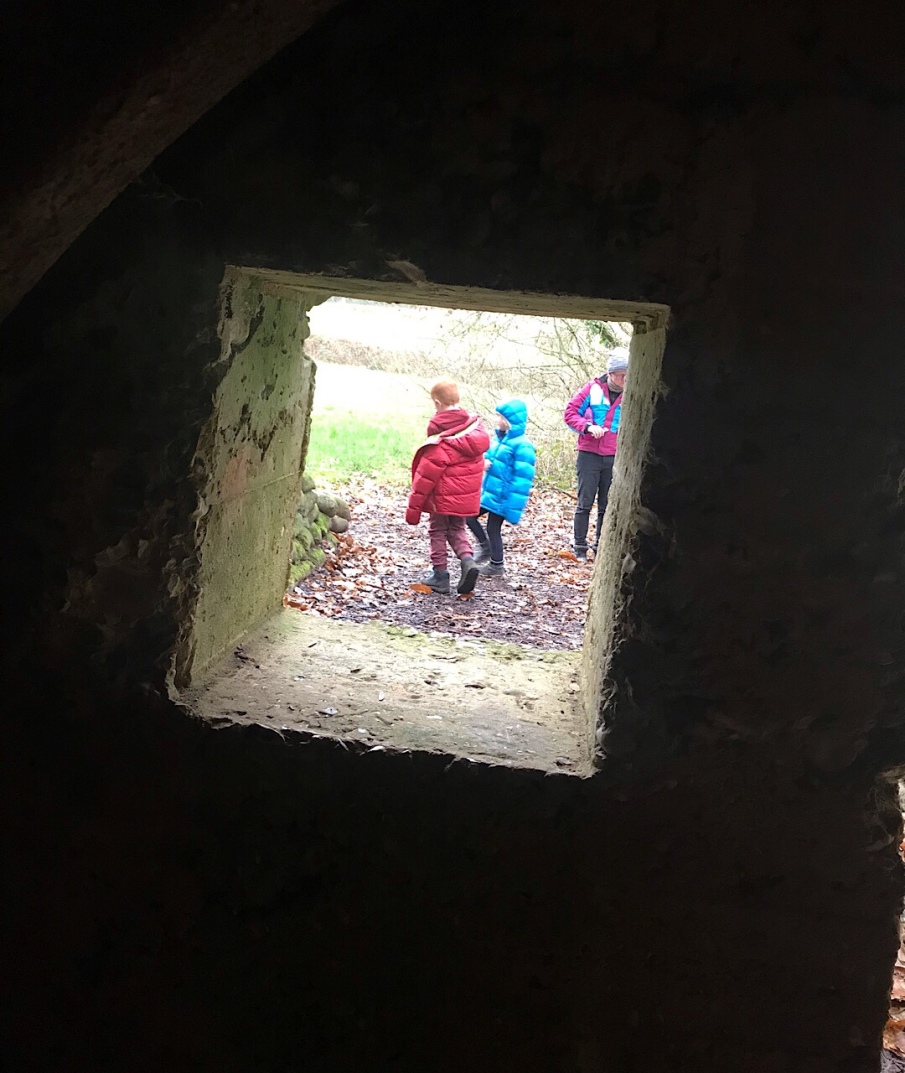 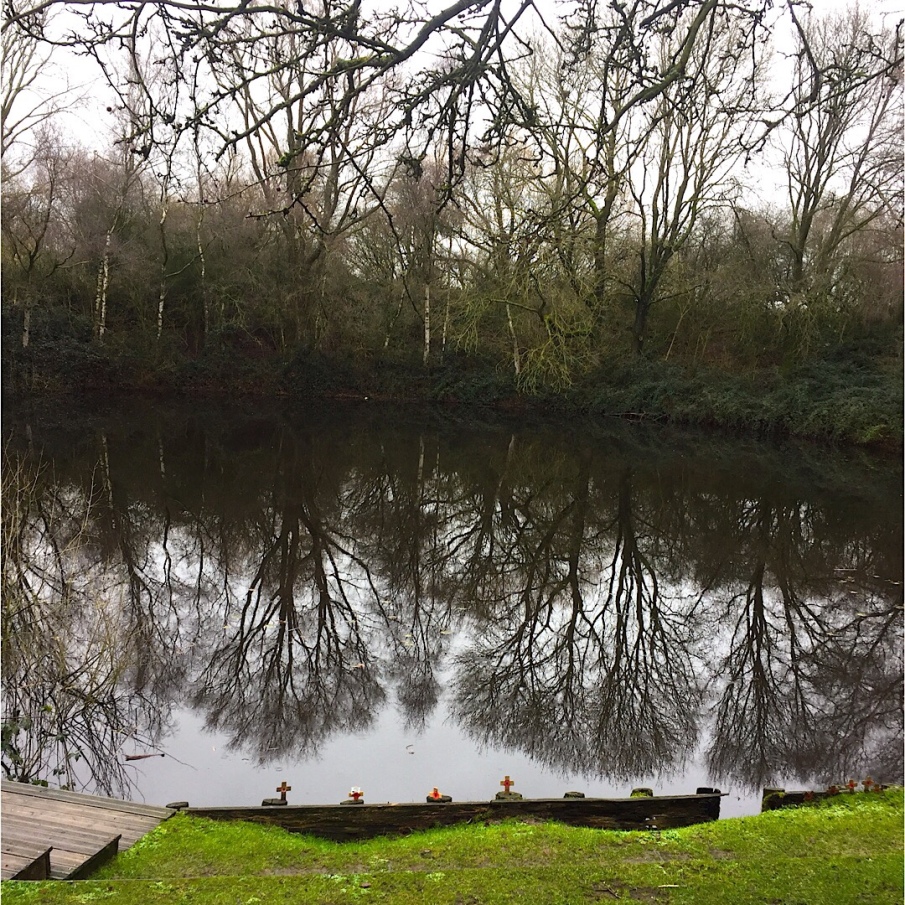 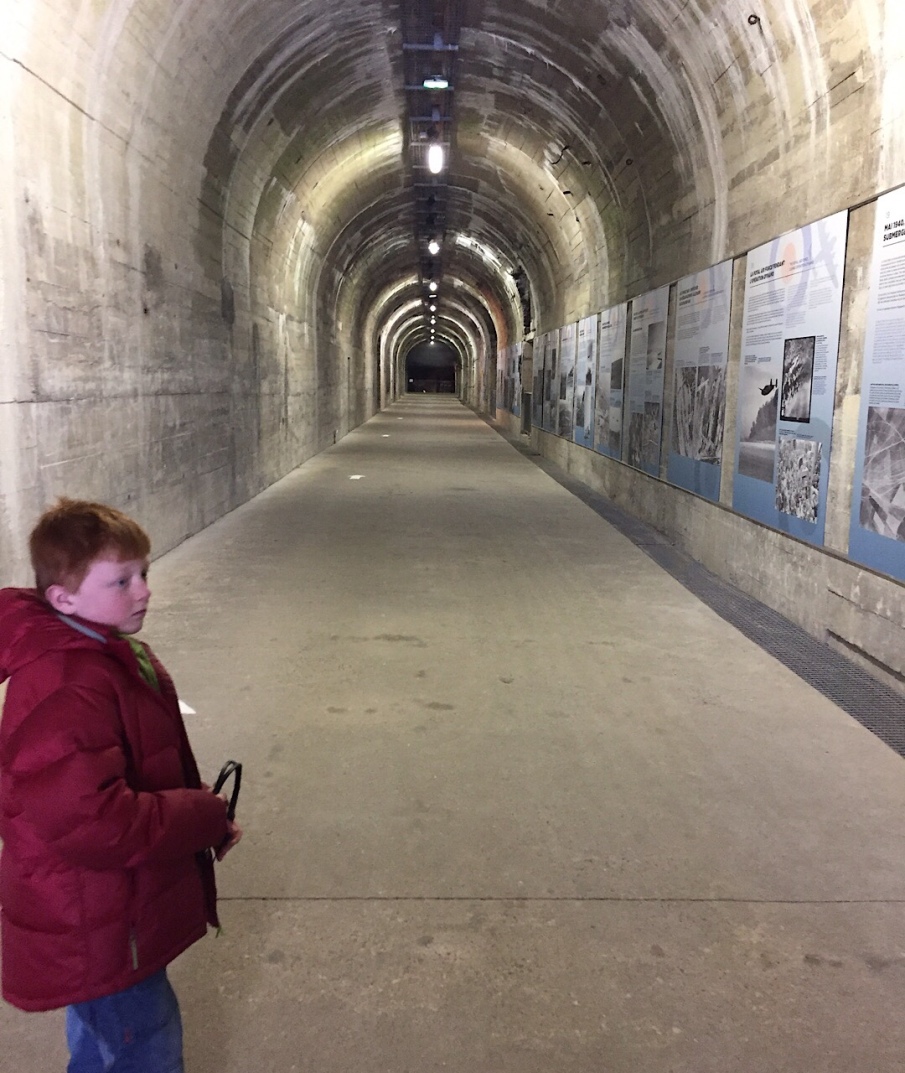 Reminders of the sheer human toll – civilian and military – were everywhere. Bug was so cut up at the first cemetery we visited, he preferred to stay in the car for others. The girls liked signing the visitor books at each one and spotting the commemorative poppies scattered amongst the gravestones. Helping Bug to understand the dramatic shift to the modern alliances that exist today under the European Union only a couple of generations after WW2 was a welcome challenge.  Trying to then explain the rationale behind Brexit was much more difficult. 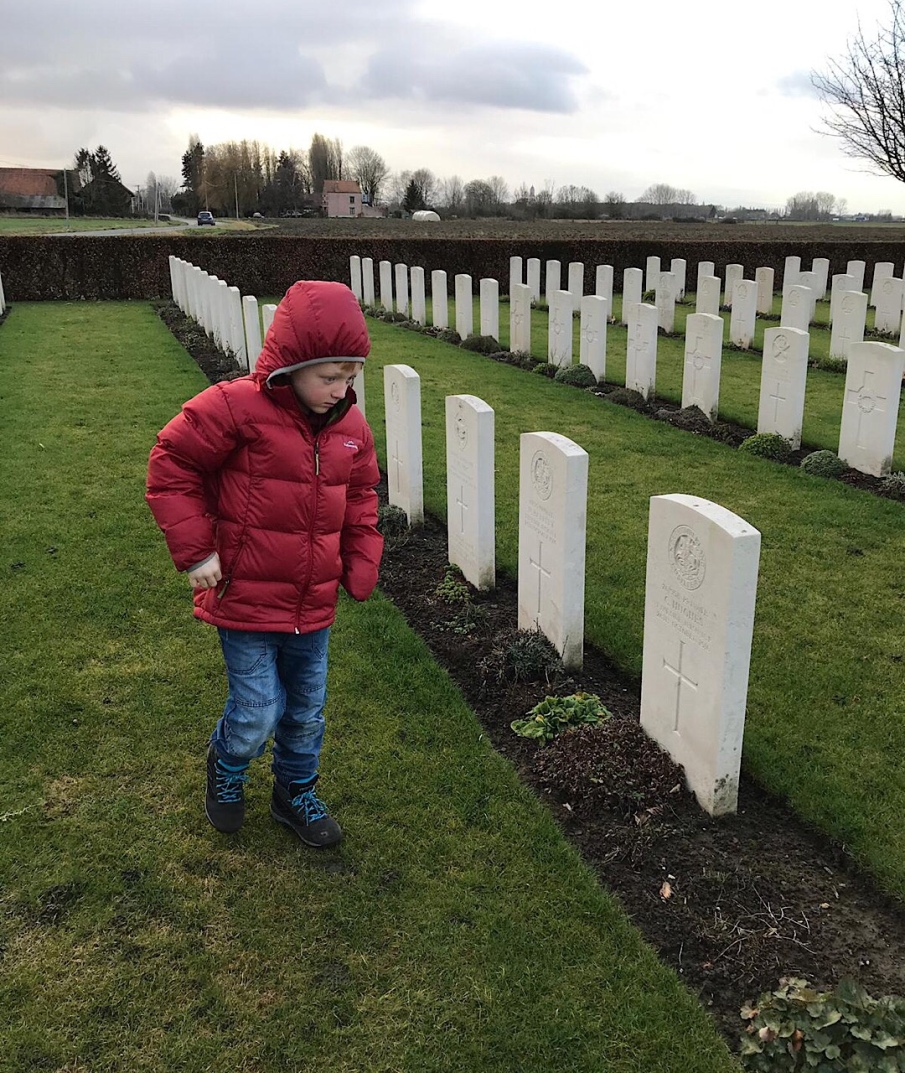 What was our impression of Flanders itself?  It’s a stunningly beautiful area, especially the rolling hills in Heuvelland on the Belgian side, a patchwork of paddocks and woods dotted with village church spires in all directions. We could imagine a few weeks in summer cycling from town to town. Our eyes feasted on magnificent churches, little patisseries and boucheries, old pubs and brasseries, tiny stone chapels on random paddock corners where locals can pray and, oddly but conveniently, roadside vending machines offering bags of fresh fruit, vegetables and eggs. 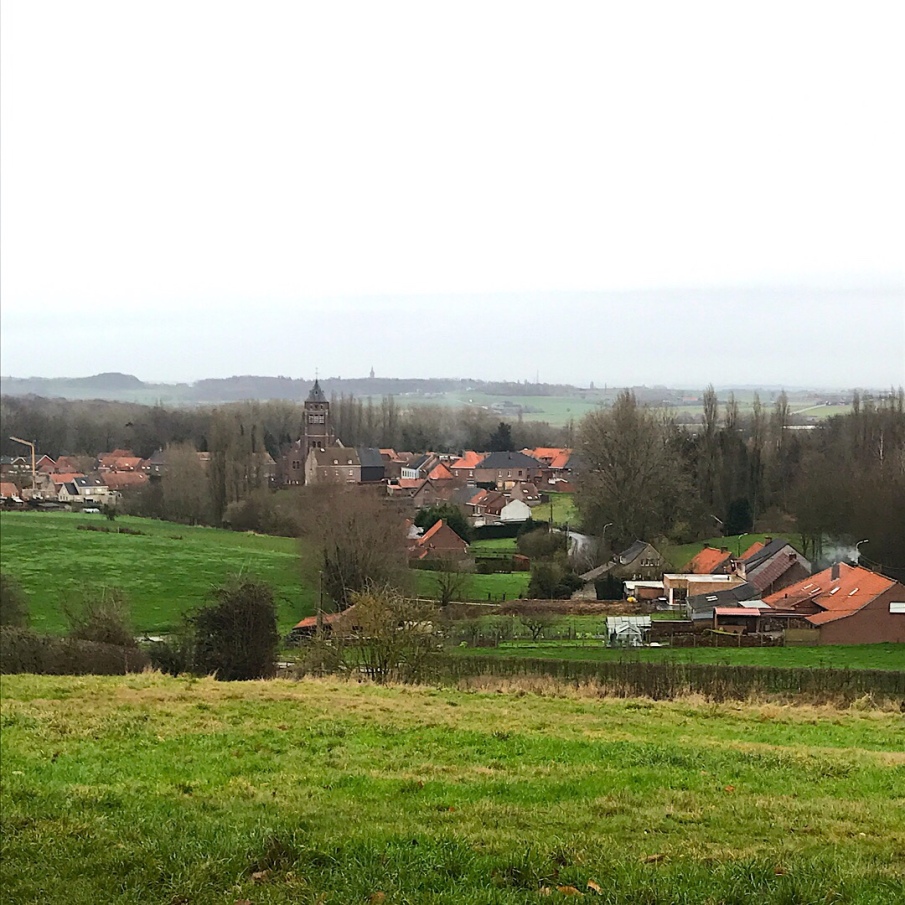 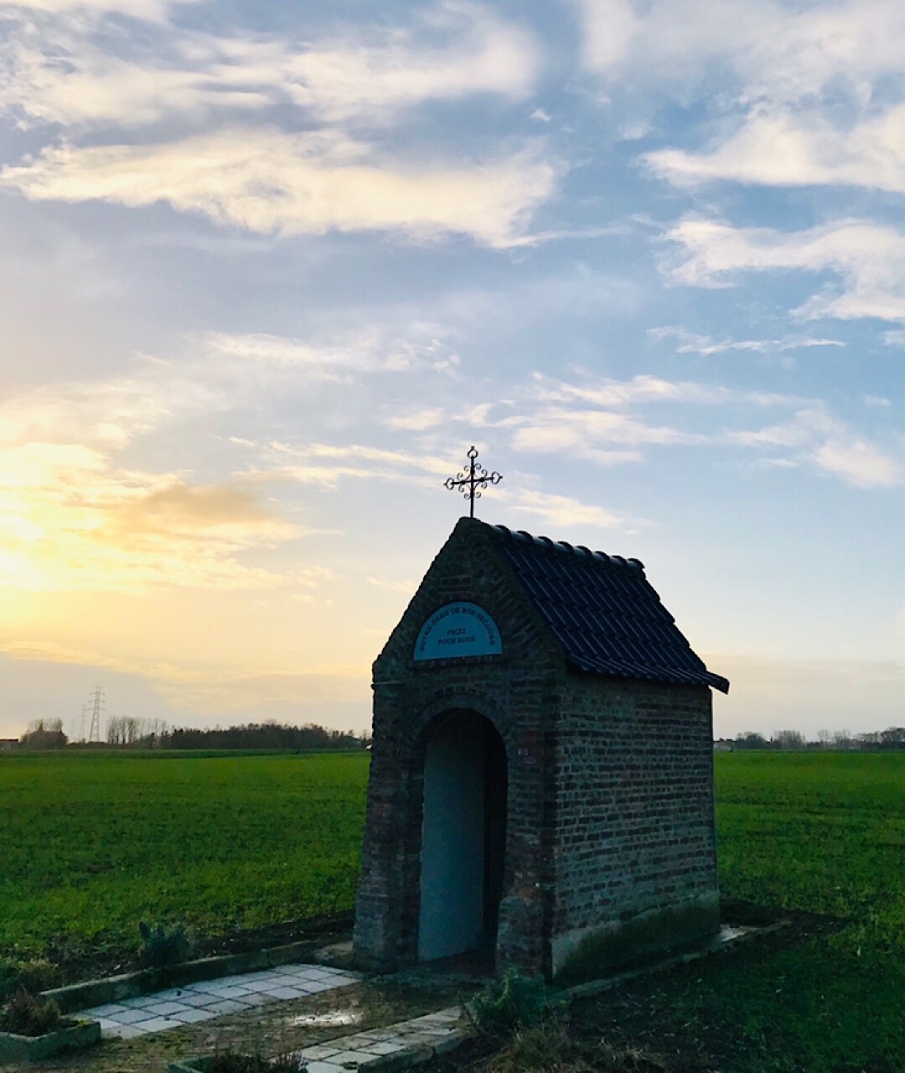 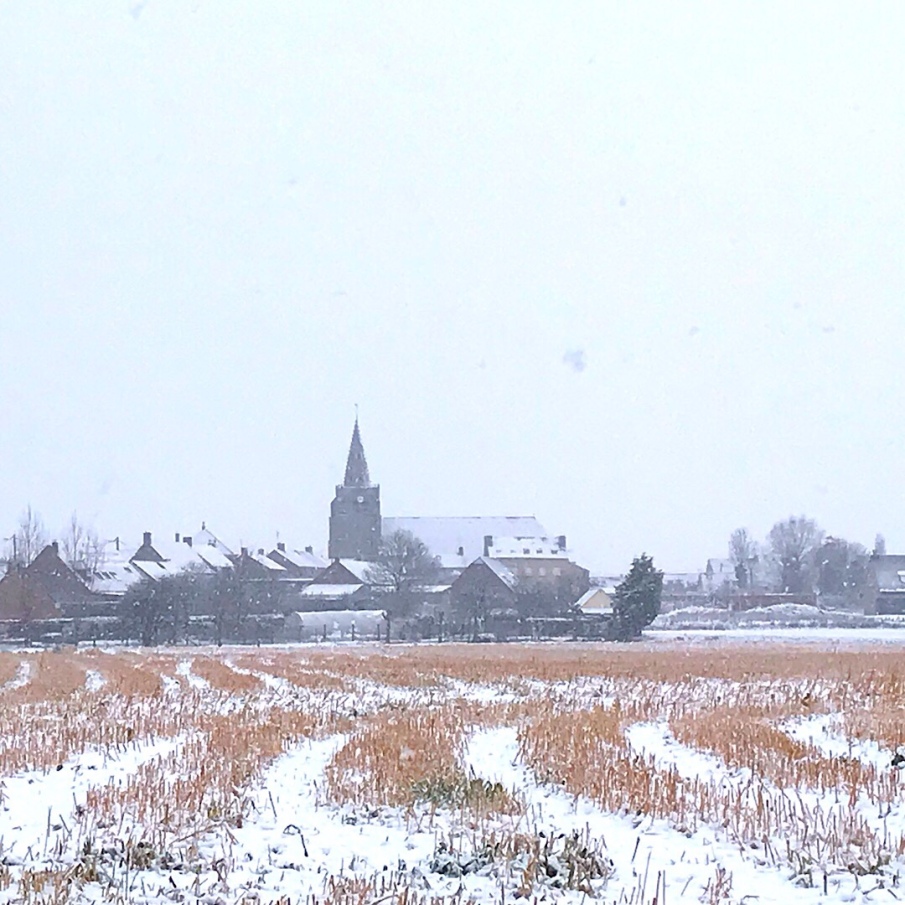 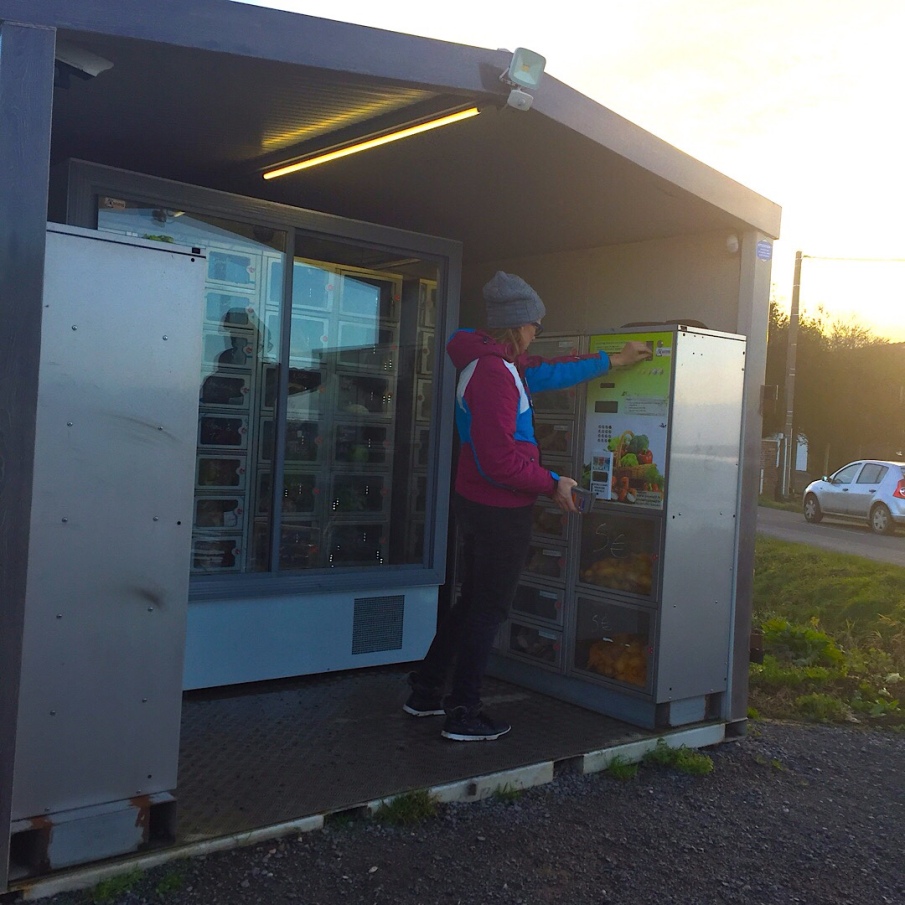 It snowed on our first full day in Looberghe. Real snow to most young kids from Adelaide is about as foreign as moon dust.  A 10-minute walk down the country lane to the village patisserie turned into an hour long snowball fight, snow angel making and snowflake eating bonanza. Gold. It also meant a day indoors where the kids continued their vital education in foosball (table soccer), snooker and cards. 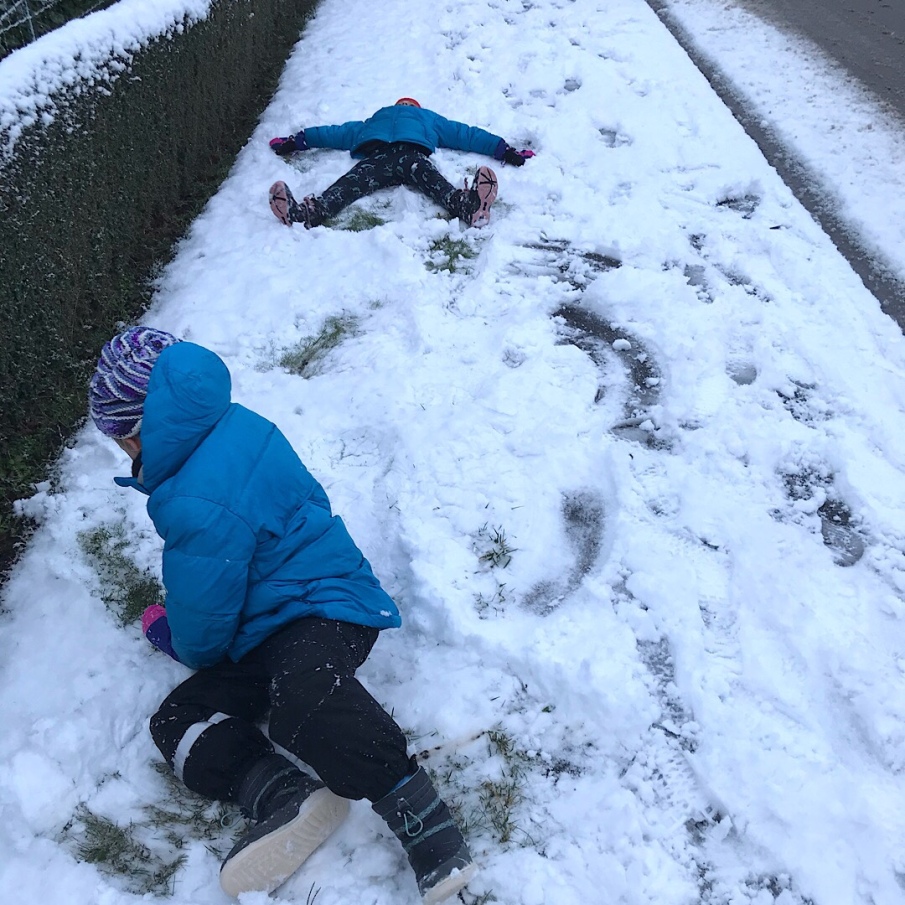 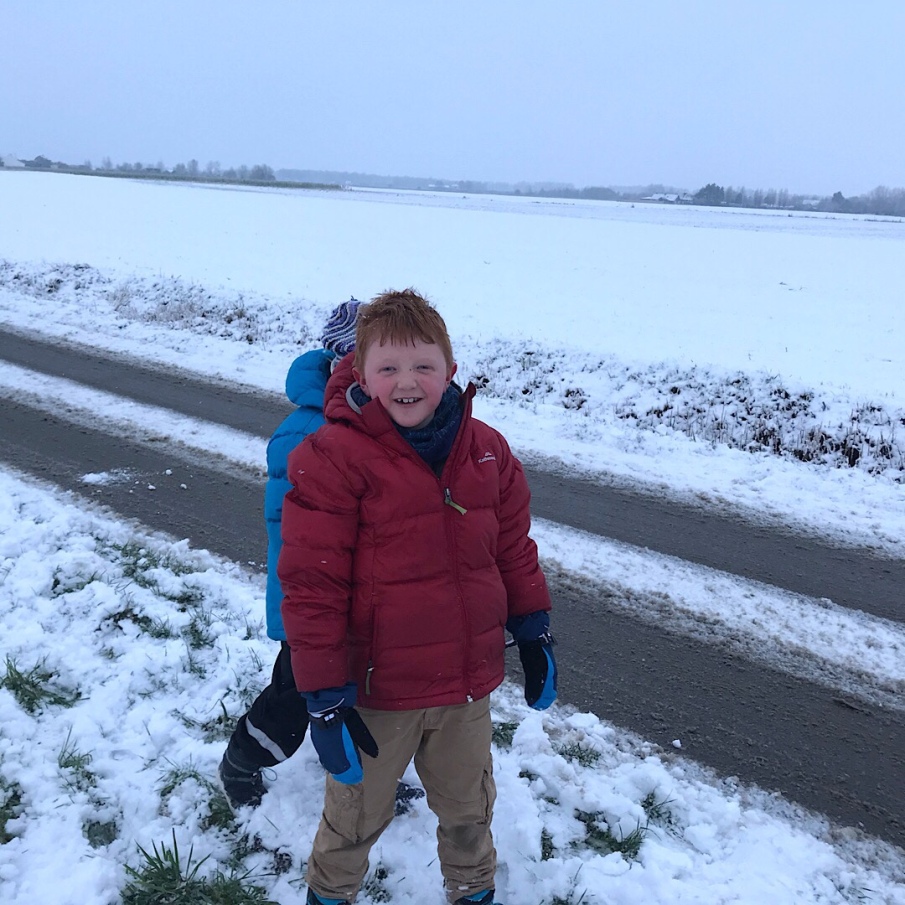 As a footnote, we were the only tourists wherever we went, competing for space with just a school group or two. Might explain why everywhere else was shut … and caused us to reflect more than once on our choice of itinerary. 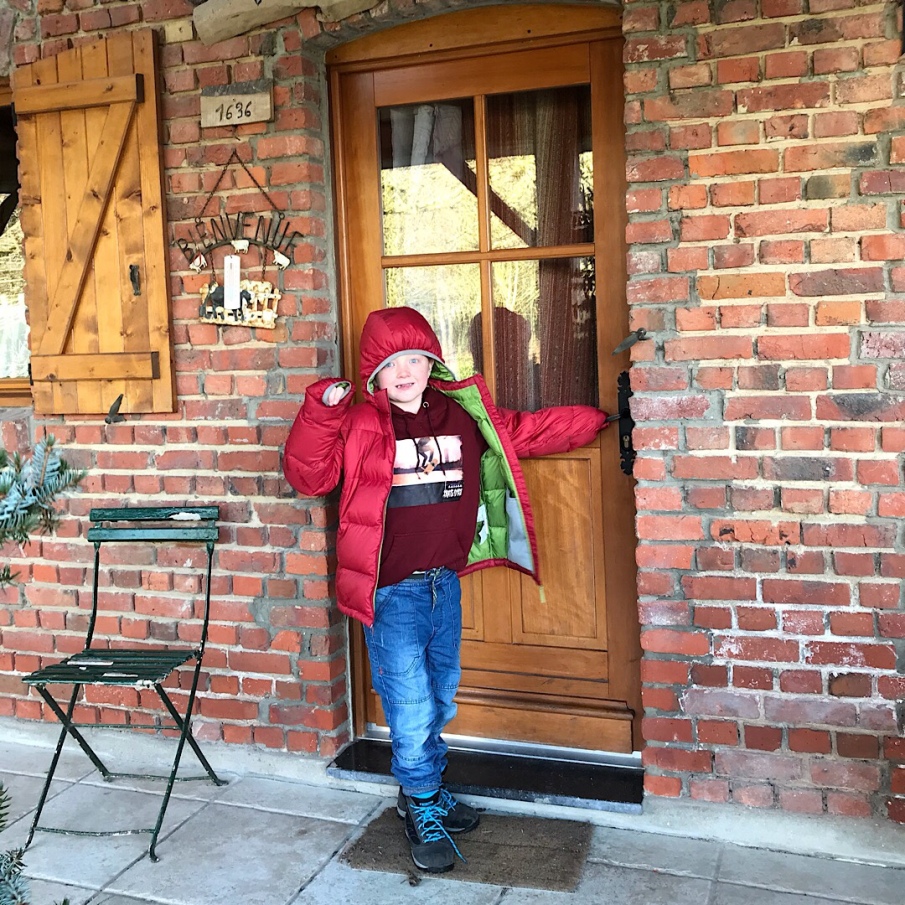