If you at any point think we must be travel gurus to take this journey, allow me to let you down gently. The extent of my travel naivety knows no bounds and in telling you so (with an endless number of spectacular travel fails as proof) I hope to convince you there is no magic to long-term travel: just bluff, persistence and mild to exaggerated optimism in your ability to think your way out of a bind … much like life really. 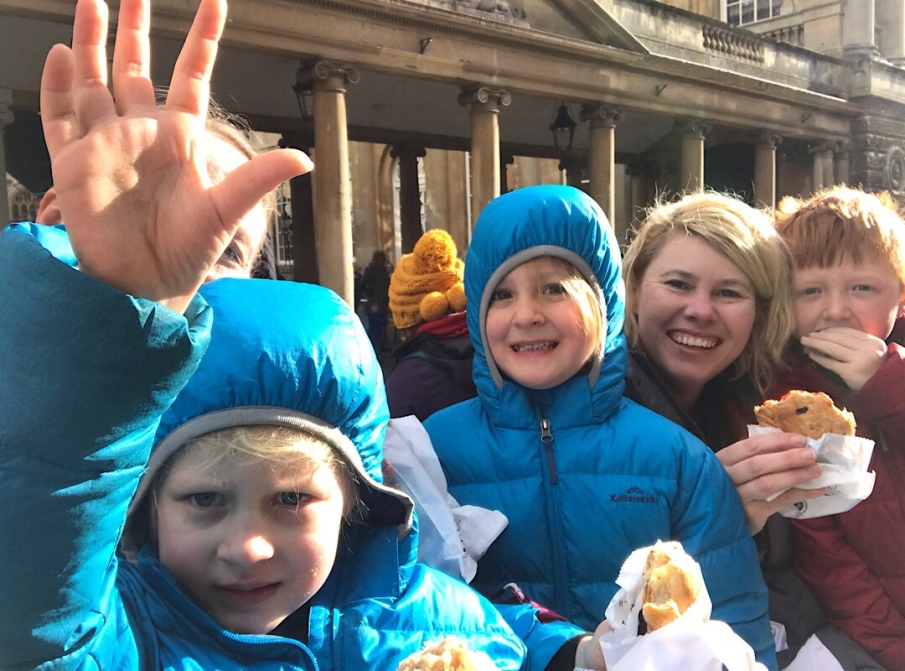 Yet again we broke our own golden rule and booked an early morning journey. Sigh. This time? A bus from Lille to London that required we wake up the kids at 4:30am and bundle them in the car for a rainy, pre-dawn drive from our rural gite to drop off the car and stand in the brisk air outside Lille Gare Europe for one of dozens of coaches jostling for parking spots.

Where my aforementioned ignorance peaked was at the Channel Tunnel.  Yep, we’ve all heard of it but do many of us truly know what it is?  Well, I reclined back on the bus picturing us sailing through a multi-lane highway and effortlessly popping up in England. You too?  No?  Well, strike me pink… the tunnel is actually a bizarre-looking cargo train (Eurotunnel Le Shuttle) that hauls all the trucks, buses and cars through a skinny tube under that murky English Channel. It has the decrepit yet futuristic look of a forgotten Star Wars colony on the furthest reaches of the galaxy. It takes a heck of a long time to load. It also requires bus drivers to be equipped with eye-wateringly fine parallel parking skills.

And what’s more, we had to get out the bus twice on the France side for EU and then UK immigration checks. Our gaggle of five Aussies held up the entire bus of EU passport holders by at least 20 minutes getting politely grilled on our plans for staying in the UK and proving we had a ticket out. No wonder a lot of emotion gets pent up during the Ashes cricket series.

Nine hours after leaving our gite we were deposited at Victoria Coach Station and into the caring and capable arms of friends Theresa and Richard who led us like shepherds with their befuddled flock to their wonderful, cosy inner city flat and a roast dinner for the ages.

Arriving in the UK marked the beginning of our time as housesitters. We signed up many months ago to a global web service – Trusted Housesitters – and had been invited to housesit four properties before even arriving on English soil. Now, let’s be honest for a moment. Like us, I bet you didn’t think our family of five on the other side of the world would be a welcome proposition but thankfully some lovely people had put their faith in us and we were really looking forward to finally being able to repay this goodwill and take care of their pets and homes. So, with plans in place to return to London for a longer stay, we eagerly set off the next day for our first assignment.

Driving through London – one eye glued to the road, the other to the satnav – is really, really slow. Bet you’re thinking it’s because of the traffic. Well, yes and no. It’s mostly because the roads are single lane and limited to a mere 20 or 30 miles per hour (32 or 48 km per hour). Now that’s slower than my quiet suburban street at home. No sweeping motorways carrying four frantic lanes of traffic into the very centre of London. This ain’t Los Angeles, Paris or Sydney. We found it quite magical weaving through the myriad of ‘villages’ that comprise London, like Crystal Palace with sweeping views of the city … but, hey, we’re not long-suffering London commuters or battling to get kids to school on time.

Our first stop was a lovely country property outside the beautiful Wiltshire town of Great Bedwyn. The green hills surrounding us gave no hint as to the ice and snow that was to define our six-day visit and that of our adorable canine companions Alfie and Millie, horse Gregory and chickens.

The cold clamped down on us first. Over three nights the ice in Gregory’s big water tub got thicker and thicker until it was completely frozen solid (resembling an ice cube for a giant’s whisky glass) and I was mucking out frozen pooh-balls from his stable. We sat in the warm kitchen cuddling the dogs as they shivered after their walks. We made a misguided attempt to visit the ancient stone circles of Avebury … which thankfully could be viewed from the comfort of the Red Lion Pub with the other six brainless tourists out that day. 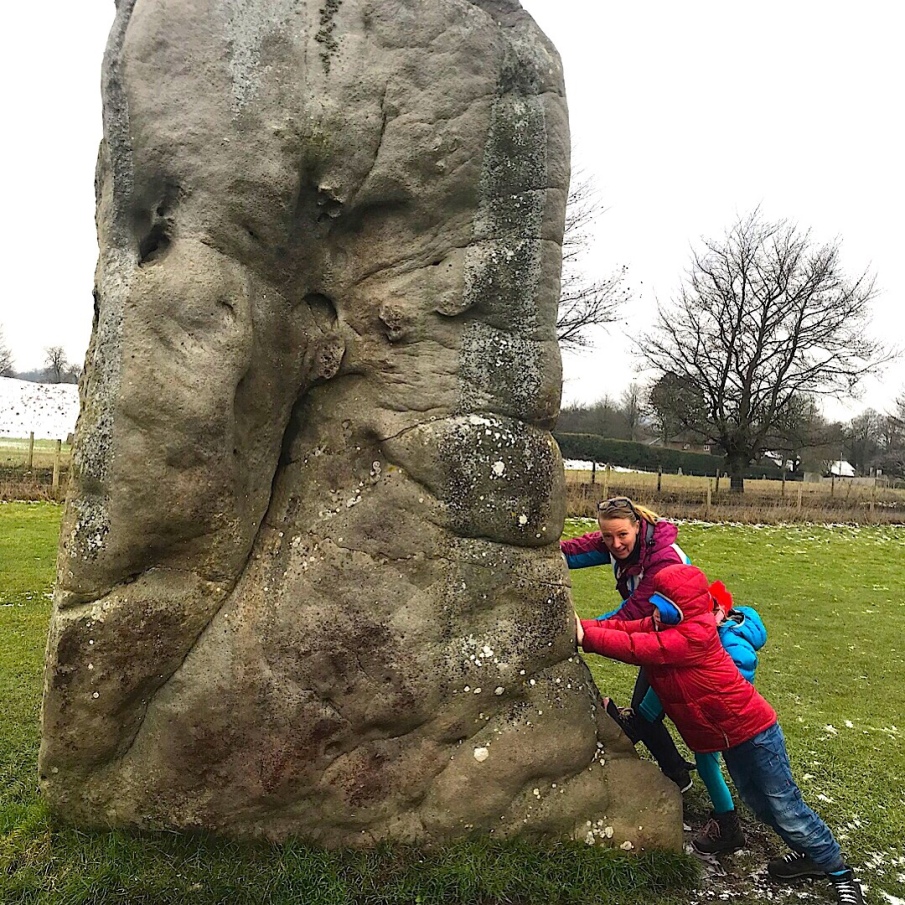 Then ‘snowgeddon’ arrived. The storm hit much of England hard but it must have got tired rampaging and instead contentedly squatted over our little corner of Wiltshire and deposited hour after hour of snow from its cloudy bottom. The landscape was transformed to white in 24 wondrous hours of snow fairies, snow balls, snowmen and me finding any excuse to go tramping in the fluffy stuff to check on Gregory down in his stable. 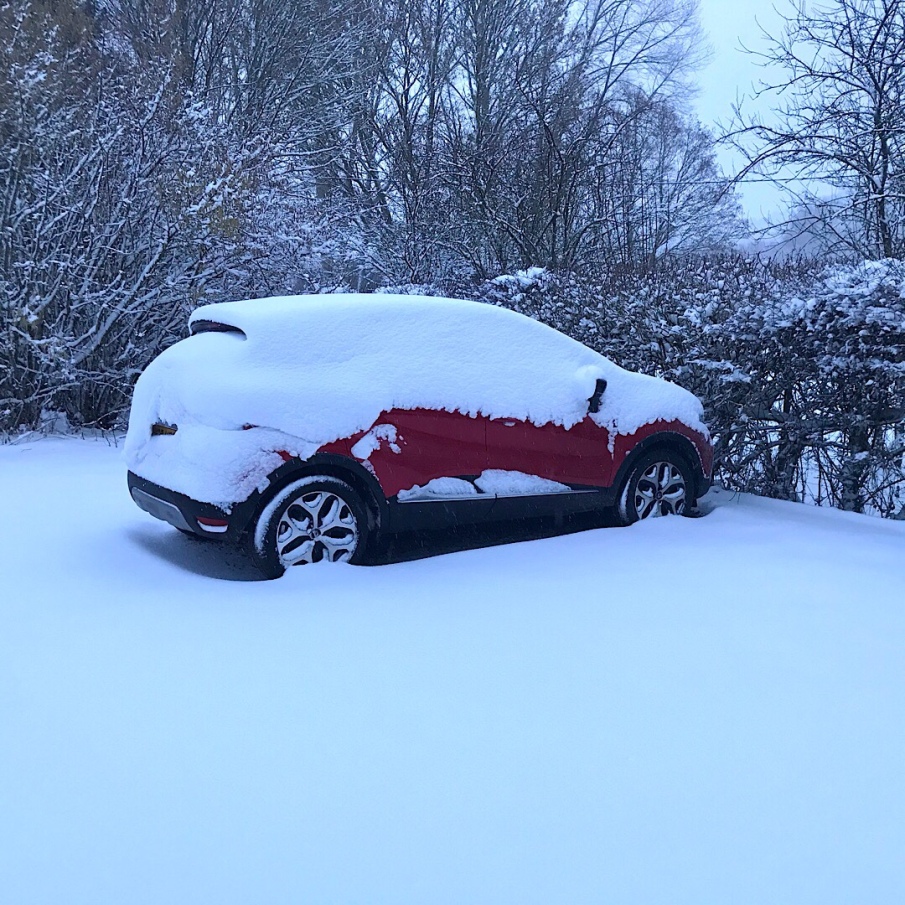 By next morning the sun was out but the dogs, chickens and car wouldn’t or, in the case of the latter, couldn’t. With essential supplies running low (milk, bread and Squirt’s baked beans) and walking our only option, we rugged up and took the slowest, snow-ball-throwing-est, awesome-est meander up the tree-lined track into town. We pinched ourselves at the beauty of it. The kids bought ice creams. Yes. Really. 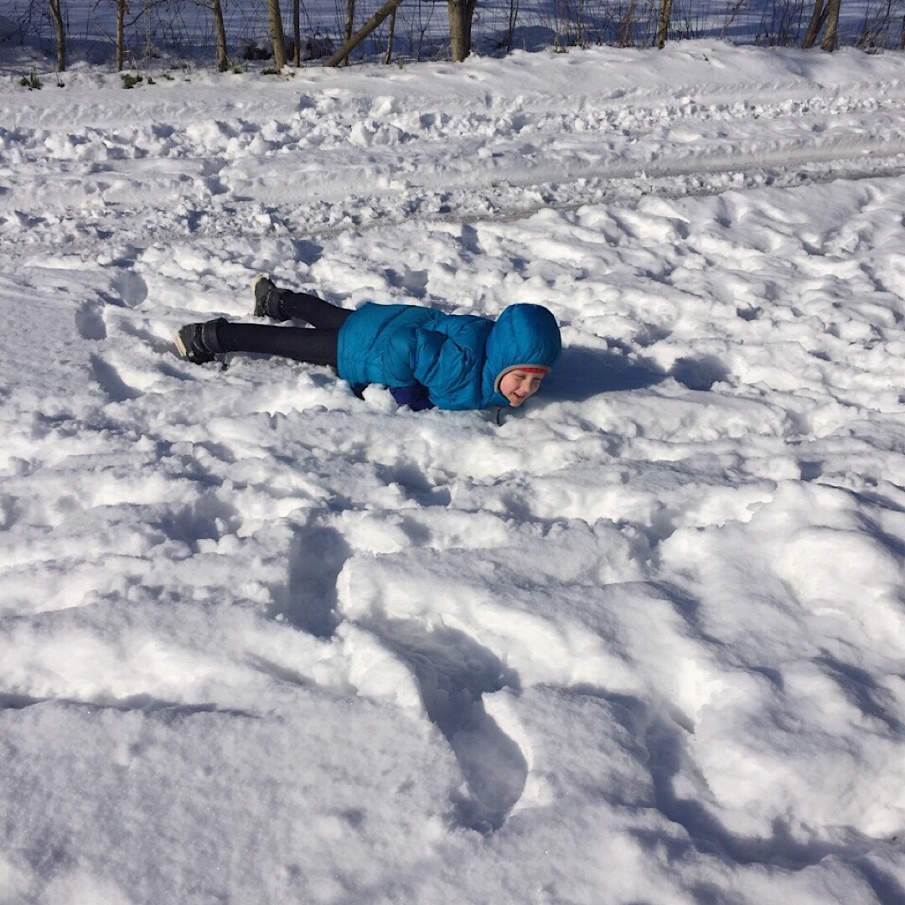 We dug out the car the following day and crawled along icy roads with sweaty palms and anxious expressions towards the green hills of Somerset – past Stonehenge, as if it was a roadside curiosity – and our next housesit outside the stunning historic town of Castle Cary. Awaiting us were Bertie the labrador retriever, Tiger the wire-haired daschund and two amiable chickens. Surrounding the property were apple orchards, woods, country laneways, fields full of sheep and cows, pheasants, squirrels, birds and deer. We collected eggs, frolicked in the hills, made cheese, baked muffins, fed the birds and gazed at the full moon. We were living a dream imagined from a lifetime exposure to English stories, suspended somewhere between Jane Austen, James Herriot, A. A. Milne and Enid Blyton. 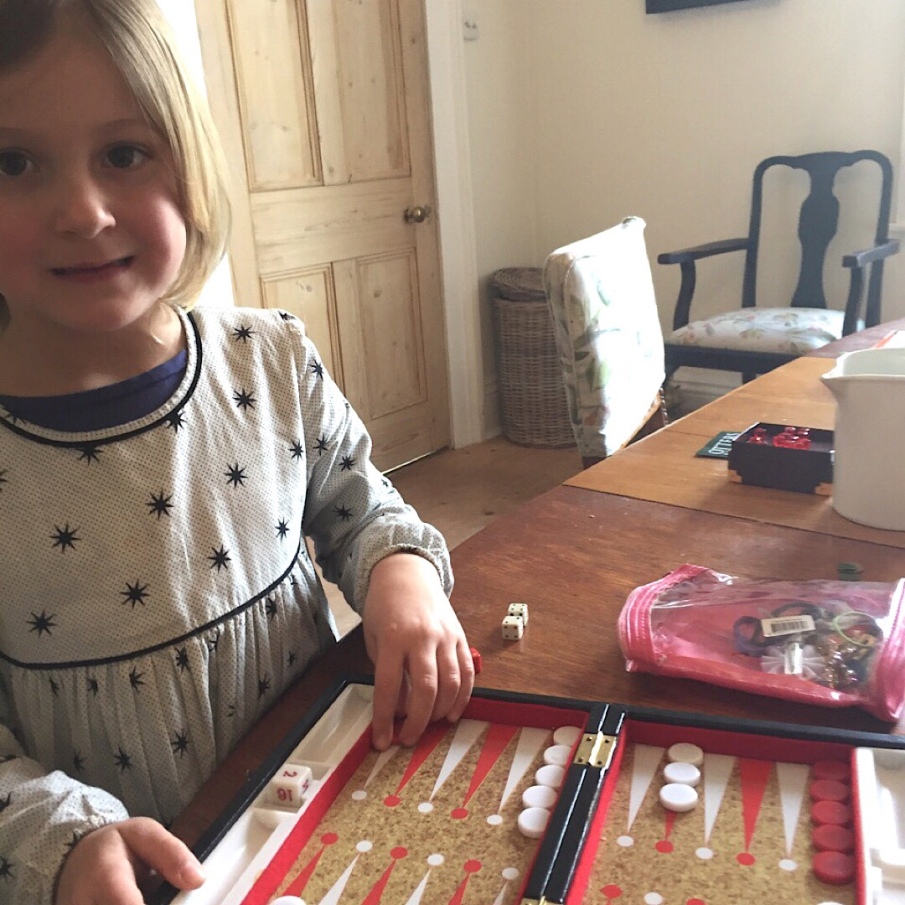 This three-week stay in Somerset was the longest we’d had in one place… and we all revelled in it. We stayed home. A lot. We pottered around. We cuddled the dogs. The best part of housesitting is that we’re living in someone’s home, of kind people we’ve got to meet and with pets to love and care for, so it immediately feels like our home. It’s comforting and so our pace slows. We focus more on home and less on intrepid adventure.

One thing we loved was learning to cook with an AGA.  As all fans of Escape to the Country know, an AGA in the kitchen usually sends home buyers into raptures.  Well, Lisa took one look at it and was gleefully jumping up and down (she’s an introvert, so on the inside only folks).  What is this appliance of beauty and majesty?  It’s a large cast iron oven that burns constantly for both cooking and a source of heat (a godsend in the depths of snowgeddon). The AGA in Somerset had four ovens – one burning hot at about 240C (Lisa named it the pizza oven), another at 170C (her cake oven), a simmer oven and plate warming oven – plus two large stove tops.  After a couple of days everything from fried eggs to pasta to jacket potatoes to banana bread emerged from this beast. But please ask Lisa why she really loved it so much?  The answer, dear friends, is in witnessing her draped over it of a chilly morning while clutching a coffee, absorbing heat like a reptile on a sun-soaked rock. 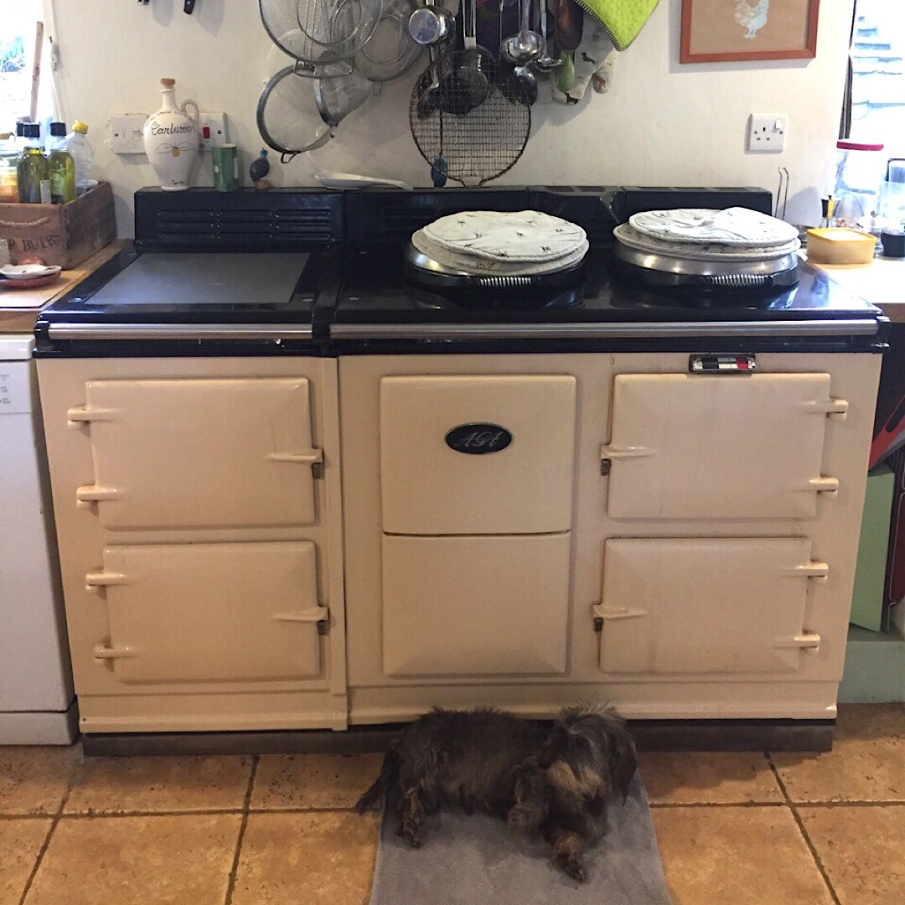 When we ventured out, it was to be let loose on the rural roads of southern England. We felt like rally car drivers, alternating between crazily weaving through impossibly green countryside and puttering at a crawl past schools, tea rooms and 400-year-old pubs in tiny hamlets. We’d repeatedly stop to squeeze millimetres past on-coming tractors and Range Rovers on skinny, hedge-lined laneways that pretended to pass as dual-lane thoroughfares. A short journey of 30 miles (48 km) could easily take 1.5 hours, even after satnav calculated the fastest route based on 70,089 permutations. No kidding. And, only once did our stoic kids get car sick. Miracles do happen. But the extreme beauty of our surrounds, the sunny and mild winter days, and the destinations themselves were thoroughly worth time spent in the car, which you can read about in a separate blog. 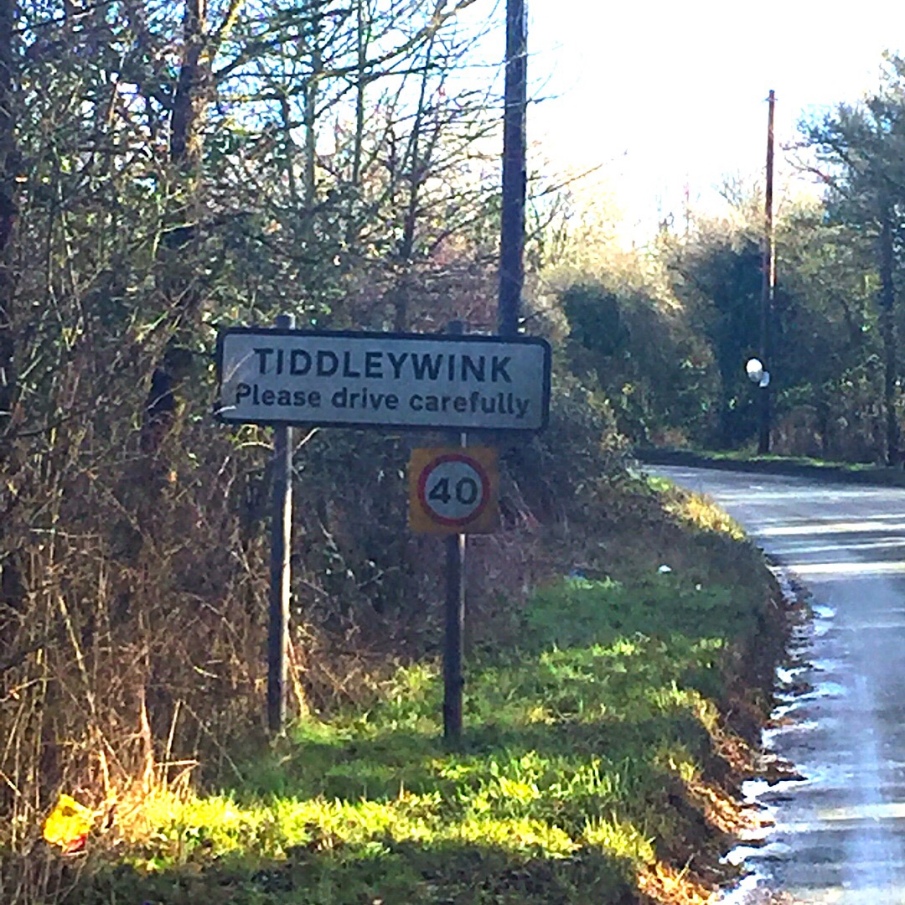 We were really, truly sad on the final day. Squirt summed up our collective thoughts, saying she ‘never wants to leave’ … whether it was Bertie and Tiger, our home of three weeks, the apple orchard, the winding lane to the house, or beautiful Somerset.